“That’s it girls! Work the camera!” Kevin grinned, flashing 5000 photos of his cousin’s daughter, all grown up. Brooke and Andy looked fantastic as they flipped their hair and moved for the camera, finding the best poses for instagram.

“I can’t believe how grown up you are, sis!” Christy grinned, proud of her big sister. She could only hope she looked as good as Brooke on her own prom night.

“Thanks, twerp.” Knocking her arm playfully, Brooke pulled out her phone. 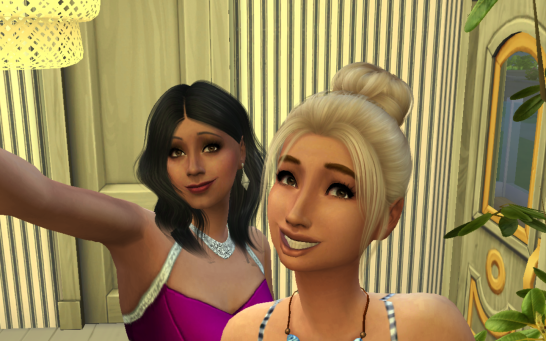 “Say cheese!” She laughed, clicking the button to get every last angle. She wanted enough memories of tonight to last a life time..

“When you’re a famous dancer, we’ll be looking back at these pics and remembering you before you became a star!” Christina grinned.

“She’s not being stupid, she’s being realistic!” Cameron’s gruff voice came from behind Brooke and she turned to hug her dad tight. “I’m so proud of you princess. Both of you. My girls.”

He pulled Christy into the hug and the three of them laughed together happily.

“There you are, gorgeous.” Casper grinned, taking hold of Brooke’s hands. They’d been dating for almost 6 months now, and he couldn’t believe how lucky he was. He just knew their relationship was going to survive Brooke being at performing arts school. As everyone danced and mingled together, Brooke looked at the collection of cheeky toddlers dancing next to her. George, wearing his coolest bunny with glasses hoodie, was looking anxiously for his mom (who hadn’t even left yet) and Lucas, aunt Robyn’s two year old adoptee, had that gleaming look in his eye that meant trouble. She didn’t even know where Willow, Elena’s youngest, had toddled off too.

“Christy, are you sure you can handle all this crazy?”

“Sure, Zac is coming over soon, we’ll be just dandy!” She hoped…

“Aunt Robyn, I’ll be fine. Mom said you used to get grief off her like this too, don’t you remember?”

She did. Was Robyn turning into Addy? Mind you, she understood the worry now that she was a mom too.

“We’re gonna be just fine! Right Lucas?” Christy swooped the toddler up and he gasped in surprise, before bursting into a fit of giggles.

“Yes!Yes! Yes!” He was picking up English surprisingly quickly, but at that age it is supposed to be much easier, right?

Christy nodded, too busy flying Lucas around and pretending he was an aeroplane. “Yes! Mommy!” Lucas added and Christina began to question that understanding of English that she had so quickly praised…

“You guys, we’re gonna have so much fun!” Zac grinned and Christy couldn’t help but smile at his enthusiasm. He’d grown up so much since they first became friends not so long ago, but he was still the same cheeky chappy. Except he’d got pretty cute…

“Who wants a piggy back ride?” He grinned, and Willow held out her arms expectantly. When she finally let him walk to the kitchen to get a drink of water, Zac was stopped in surprise in the hallway.

“What is it…Oh!”  Christy gasped as she burst through the door into the hallway, standing behind him. She couldn’t believe her eyes!

There was Lady, with her long awaited puppy.Christy had expected more really, but was delighted nonetheless. “What are we gonna call you, little fella?” She beamed as Zac crouched down next to her, petting Lady gently on the head.

“He sure is little. What about Scrappy, like from Scooby Doo?” Zac suggested. “Scrappy Doo. I like it!” Christina laughed, as the three toddlers suddenly came charging in. Screams of Woggy! filled the room, and everyone queued to get a cuddle from the newest member of the family. Christy couldn’t have been happier.

Hi, my name is Gee and I play sims! I'm currently writing The Asteria Narrative, my legacy. Please check it out and chat with me, I'd love some simmer friends! View all posts by poptarts-